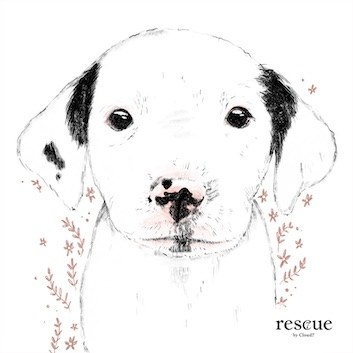 TOGETHER FOR ANIMAL WELFARE The RESC7UE Collection

Cloud7 is a company that puts dogs first amongst all else. Ever since the first numbers are printed on the blank piece of paper, spare funds and products have been routinely donated to good causes.

Together with renowned artists and photographers, the RESC7UE collection was born, from which the profits are donated entirely to registered animal welfare organizations.

The RESC7UE Collection by Cloud7

Together for animal welfare.

Cloud7 is a company that cares about dogs more than anything else. Ever since the company has been writing black figures, Cloud7 has been donating money and products for good causes on a regular basis. In addition to sponsored dogs in shelters as well as their own rescued family members from Cyprus and Portugal, the company works together with carefully selected partners to promote sustainable animal welfare: Among others with the organizations Pro Animale, Helen's House of Hope and EVERYDAYSTRAY.

As a globally renown design label, Cloud7 now has the necessary reach to achieve even more and to generate more attention for specific topics. And in this particular context, the official RESC7UE collection is now being released in close collaboration with leading international artists, illustrators and photographers.

The photography book EVERYDAYSTRAY in collaboration with photographer and animal charity activist Robert Altermoser has already been a huge success, generating 4.000,00 EUR within only 3 months.

Now the charity collection is being continued with seven Tote Bags and eight T-shirts, which have received a heartwarmingly tasteful design thanks to the top-class, globally active graphic artists Walter Glassof ("Love" and "Friends"), Anna Süßbauer ("Heart") and Michael Goodson ("Rainbow"). The cooperation with these artists is in an honorary capacity.

It goes without saying that the quality standards typical for Cloud7 are observed for every product - including other items in the RESC7UE line that will follow in the future. For example, the book is bound in high-quality linen and each tote bag and T-shirt is finished with a fine silk print on organic cotton.

The RESC7UE collection will continue to grow over the course of time, so that many more dogs can be supported through various projects and animal charity is noticeably expanded.

Where the donations go: EVERYDAYSTRAY

The entire proceeds of all products sold (minus transport as well as production costs) will be donated to the registered organization EVERYDAYSTRAY, which supports street dogs in Bulgaria.

The organization was formed after its founder Robert Altermoser - besides his artistic work as a photographer - worked for various organizations in Romania, Bulgaria and Greece. He had to realize that the animal shelters throughout Eastern Europe are hopelessly overcrowded and it is almost impossible to take care of more than 100 dogs a day and at the same time look for a suitable home for them. Most of the animals living in the shelters come from the streets, where the conditions are extremely dangerous and the dogs have to fight for their survival every day.

Unfortunately, the number of these street dogs is increasing at an alarming rate. Every spring, more newborn puppies reach the streets; because un-neutered dogs are abandoned on a regular basis, who shortly afterwards meet other un-neutered street dogs. But there, on the streets, a horrible future awaits those dogs. Very few puppies would even survive the first months. So the real problem very quickly becomes obvious.

The animal protection plan: How every donation helps

To prevent more and more unintended puppies with a sad life ahead from being born, the organization EVERYDAYSTRAY - now under the lead of Clair Steele and Neil Pyatt - has set itself the goal of neutering as many of the animals as possible, in addition to feeding, cleaning, worming and of course mediating dogs.

Neutering not only reduces the number of newborn street dogs, but also improves the living standards of the existing dog population. Therefore, 100% of the proceeds generated by the sale of the RESC7UE collection is used to build a comprehensive neutering program.

This is a methodology with a focus on the castration of stray dogs, but additionally also the castration of freely walking around domestic dogs of Bulgarian owners. Through this program it is also possible for people with little financial means to have their own dog neutered free of charge.

With the 4.000,00 EUR received between November 2019 and January 2020 it was already possible to neuter more than 100 dogs of owners from poor circumstances and thus prevent an increase of the dog population on the streets of Bulgaria.