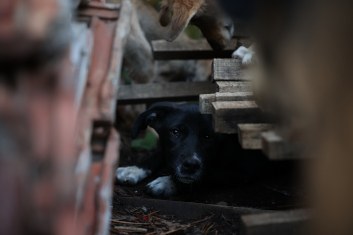 A few years ago, I became aware of the animal welfare organization Everydaystray in Bulgaria. After seeing their posts on Instagram, it felt like they were calling my name; which led me to seek personal contact with the organization and learn more about them. What convinced me was their particularly sustainable work; how they tackle the huge problem of countless street dogs, how the dogs not only receive medical care but love during their time at the shelter, their extensive castration program to combat the uncontrollable growing number of puppies, right through to the placement of many dogs with new owners and families across Europe. For Cloud7, this was the beginning of a very special partnership. Finally, in October 2021, the time had come for me to travel to Bulgaria. 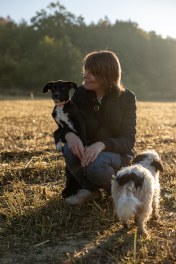 Petra with the four-legged shelter residents 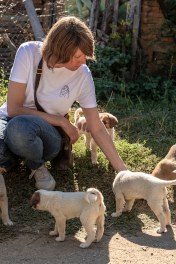 THE SHELTER IN GABROVO, BULGARIA

The shelter itself is located in the outskirts of Sofia, just under a three hours drive from the airport. Framed by mountains, we drove past an abandoned bridge and finally, hidden behind a row of lush green trees, on a road without a name, a small path leads to the big gate of the Everydaystray shelter. After hundreds of phone calls and emails, this was the first meeting with Clair and Neil – the two responsible operators of the shelter – and the rescued dogs. The idyllic grounds are accompanied by birdsong from the surrounding forest and of course the loud barks and chatter from the approximately 35 four-legged residents. I immediately fell in love with, not one, but several dogs. My next glance fell on various building materials from numerous projects Neil is working on simultaneously. Next to the wooden pallets are dozens of resting spots in front of the kennels, where the dogs can relax. A truly beautiful place, run by the English couple who couldn’t be more loving with the dogs. 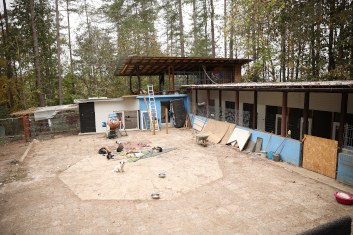 An overview of a small area of the shelter in Gabrovo

It’s crystal clear that Clair and Neil have put their heart and soul into the place. Neil, a naturally gifted craftsman, builds enclosures, puts up fences for the dog runs while Clair holds digital meetings with potential adopters to see if the chosen dog could fit into the new environment. The shelter is divided into two areas, the lower area, where there are large and heated dog kennels and a kitchen that Clair and Neil share with five dogs and the upper area, which includes a very small flat on one side, so that the dogs are cared for around the clock; on the other side is a separated area for dogs who needs extra care.

DAILY LIFE AT THE SHELTER

After a morning pack walk in the beautiful Bulgarian fields, the morning starts with medical care and breakfast for the dogs. For a few that are not compatible with the others, Neil gives them extra attention with an extra round in the fields.

The rest of the day consists of cleaning the dog sleeping areas, basic training for new arrivals, and regular „training sessions“ for the different dogs to better understand and get to know each other. Again and again I thought about how many wonderful dogs there are amongst them, who would have no problem settling down in a city such as here in Berlin. There are very few exceptions of dogs whose behavior is still unpredictable due to their unknown past experiences in the streets. However, these dogs can stay in the shelter until they are sufficiently socialized. There generally exists a very peaceful coexistence among the dogs. While walking through the village, we had the ability to witness how positive the community was towards Clair and Neil. Over time, they have built a really special trust with the residents in the nearby village. 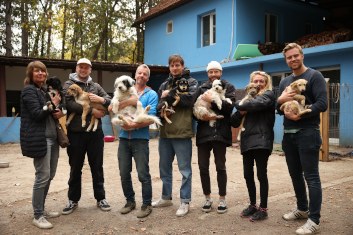 Clair, Neil and Petra with the film crew and some of the shelter residents

OUT AND ABOUT IN THE VILLAGE

As I accompanied Clair on a round through the nearest village, we fed street dogs and checked their conditions. While doing so, I found a small female, very friendly puppy on the street, who was no more than four months old at the time. You could see the excitement rushing through every inch of her little body as I gave her my attention. The little one had a deep wound in her leg and how grateful was I when I remembered there was still a free enclosure for the little dog. I took her on my lap and together we drove back to the shelter. After a series of treatment given by a vet friend of mine, the wound fortunately healed very quickly. The dog now lives her best life with the happiest parents in France.

On a different day, as we walked through the village with the film crew, we found a completely exhausted female dog on the side of the road and decided to stop to feed her. The female, who obviously had puppies recently, only took a small bite before she walked a few steps down the road. The looks that she gave me as she walked away were as if to make sure that I was following her. After a few steps behind her, she led me to her puppies who were lying 500 meters away on an off-road path. The mother dog was clearly exhausted and had no milk left for her pups. Words just cannot fully describe the feeling that was triggered in me as I saw her weak eyes begging for help. It was as if she knew that we could help her to give her puppies a better life. All the puppies have since been adopted; but the wonderful mother Katniss is still looking for her forever home.

I was able to experience so many touching moments that I could go on and on about the Bulgarian street dogs. 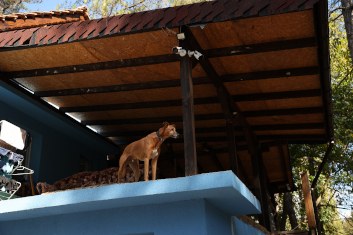 Another shelter resident taking in the view over the valleys

It was very eye opening to see the conditions under which many people have to live in in Bulgaria. The effects of poverty is so apparent in their faces, when one has to live without simple electricity, sanitation and running water. We witnessed families heating water on an open fire to bathe their children. Many houses had only holes in the walls instead of windows. The Bulgarian winter is really bitter cold and there is often only one small stone furnace in the bedroom for the whole family. This also made me realize that dogs have a completely different meaning in rural Bulgaria. Most times, they are used to guard what little there is: three chickens and vegetable patches. The street dogs often breed uncontrollably and the puppies are eventually left to fend for themselves. 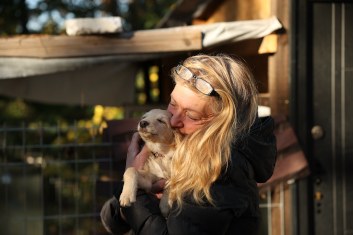 Everydaystray creates a safe place for dogs in need and gives them the necessary care. When I see Clair and Neil, I feel indescribable respect for their work, tireless dedication and optimism. What they have already achieved with their actions and to hear their plans for the future makes me proud.

Finally, the most difficult moment of the trip came and we had to say goodbye. One would like to support friends like Clair and Neil in the most down-to-earth way. But I think that, we as a company can make a very important contribution. Regular predictable financial support is high on the list, but also being there as a partner with advice and support for the people and dogs behind the organization. To know that they value us as much as we value them was a great comfort. We are still planning to expand the RESC7UE collection this year, with all proceeds going to Everydaystray along with the continuous financial support the organization through sponsorships.

If you would also like to get involved, Everydaystray is regularly looking for flight sponsors, foster families, help finding suitable families for long-term residents, local volunteers alongside financial support. Together with a befriended illustrator, Clair also wrote the educational children’s book „A Rocky Road - One small dog, one big journey“, which you can buy here with all proceeds going directly to Everydaystray. All incoming donations are currently going towards a new vehicle to transport several dogs to the vet simultaneously. Don’t hesitate to contact us or Everydaystray directly to discuss other volunteer options to support animal welfare in Bulgaria. We look forward to hearing your story.