After long exchanges with Stef, after having discovered their universe (Onedogisnodog and Letusplayberlin) after having proposed to Stef and Yves and proceed with the complete adoption process (i.e. to come to Berlin to meet the dog, to make a meeting for a soft transition) Stef contacted Helen who runs KAR, the shelter in Cyprus with which Stef works. Helen helped us to find our perfect family dog.

Soon enough, we received photos, two medium-sized dogs, we wanted to adopt a dog that was not too big, because we don't have a car and do everything by public transport: a dog that can accompany us in the train, the bus and among these two dogs, we immediately fell for Bonnie, who at that time was called Penny. A couple of pictures and a short video and we fell for her (those eyes!). But it wasn’t all easy.

We adopted Bonnie in January but as everything was closed, the borders, the planes, we had to wait for the vaccination. The winter was long, then the spring, the summer... it was only in September that we could finally meet Bonnie, we had photos and videos, but it was a long wait. We had chosen Bonnie, we could no longer say "ok, too bad, let's look elsewhere, it will go faster“. No, it had to be Bonnie!

When you start to be interested in the world of dogs, you soon realize that something is wrong. There are millions of dogs abandoned to their own fate, all over the world. Abandoned by their families in our country or neglected in many countries, so going to buy an (expensive) purebred dog seems to me a bit silly, even if I respect those who prefer to choose a particular breed. On top of that, having never had a dog, not being twenty years old anymore, I wasn’t sure if I had it in me to raise a puppy. 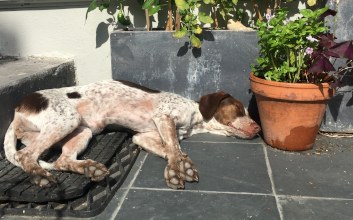 What made you decide it was the right time?

I worked very hard for years. I had crazy hours when I was in advertising working as an art director and creative director and was traveling around the world - I had no room for a dog. But in the past 6 years, I have been an illustrator, I work from home, in Paris and on the island of Noirmoutier and this time, I had the place (and the desire) to share my life with a dog.

How did you know bonnie was the right dog for you?

No idea, that’s the mystery of love.

Is Paris any different now that you live with a dog?

Everything is somehow different yet the same.

The big change is the relationship with people. Since we’ve had and especially with Bonnie who is very pretty, cute, kind and curious, people talk to me more than before. In Paris, we live right next to a very big park, the Buttes Chaumont, there are a lot of dogs there walking around and we experience something different each time we are out with Bonnie. And at the same time, our life is the same. 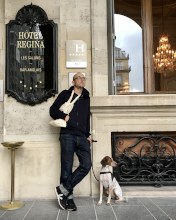 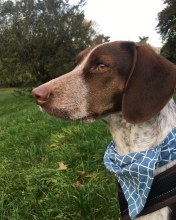 How is the overall acceptance of dogs in France? If anything, towards rescue dogs?

I don't know, I was told that I was often going to get yelled at... but it never happened. Although, this anger towards people with dogs stems from people not cleaning up after their dogs and has been a sensitive subject in Paris for years. In the park, I see a lot of dogs that come from the islands (France still has territories in the tropics and there are many associations that rescue dogs there. There are a lot of shelters and adopting dogs is quite common here, it's good.

Have you met any hurdles or challenges so far?

To be honest, Bonnie has been very easy but maybe we are lucky. The only challenge is learning how to train her - I know I have to be patient and persistent and she’s quite eager to learn. We love that training her is like a bonding moment.

Have you got any advice for others who are thinking of adopting a rescue?